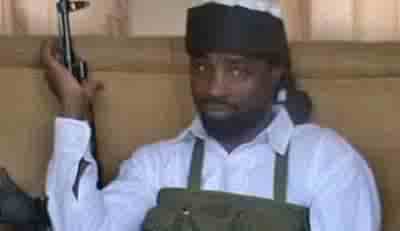 The leader of the outlawed Boko Haram sect, Abubakur Shekau, whom the Joint Task Force (JTF) had claimed was mortally injured in a shootout last month and had died somewhere in Cameroun,  Wednesday resurfaced in a recorded video message, threatening to continue his killing spree until democracy is crushed in Nigeria.
Shekau even boasted that he remained invincible and mocked world leaders including President Goodluck Jonathan, President Barack Obama of the United States, President Francois Hollande of France and Queen Elizabeth II of the United Kingdom.
Reacting to the news of his appearance on a video, the Nigerian Army yesterday refused to confirm or dismiss the recording, saying they were yet to verify its authenticity.
The JTF, last month, had claimed that Shekau had been mortally wounded in a shootout with security forces and had died some days later in Cameroun, as a result of the injuries he sustained.
But JTF’s statement had caused consternation at the Defence Headquarters, Abuja, with sources at the time that the JTF did not have their authorisation to make a statement on Shekau’s death.
DHQ sources had also expressed doubts about the veracity of the statement by JTF.
They further blamed the JTF spokesman, Lt. Col. Sagir Musa, for trying to ensure that the task force took the credit for Shekau’s death before a new army division that had been deployed in Northeastern Nigeria took over from the JTF.
Shekau, who was surrounded in the video mailed yesterday to some journalists by dozens of his lieutenants all dressed in military camouflage, spoke amidst laughter and sarcasm as he accepted responsibility for recent attacks in Borno State.
Shekau, who until he was declared dead was the most wanted Nigerian in history, with a ransom of N50 million from the Nigerian government and $7 million from the American government, seemed to have recorded the video in a bush as birds were heard chirping in the background.
He declared that his ultimate aim was to ensure democracy ceased to exist in Nigeria.
He also mocked the Nigerian army, whom he claimed his group had succeeded in taking three of their armoured tanks, a large cache of arms and fleets of the military vehicles and troops.
Shekau, who spoke in Hausa, said: “The world should know that I cannot die except by the will of Allah. I have told you that all that I do is prescribed by the Quran. The essence of it is to carry out the injunctions.
“The world should know that I am alive and will only die at the appointed time. Everybody should be judged according to the dictates of his conscience.
“What I am doing is written in the Holy Qur’an and the Hadith and I will not stop. I challenge all the clerics of the world to question my deeds. Those underrating my capacity should have a re-think. I will never allow democracy to thrive.
“Don’t bother yourselves stopping me because I cannot be stopped. The war is more grievous than you think, and it will consume you.
“I swear by Allah that there will be no democracy in Nigeria. We are going to rise against it and we shall soon defeat it. The concept of government of the people by the people, for the people cannot continue to exist. It shall soon, very soon, be replaced by Government of Allah, by Allah for Allah,”
He added: “It was said that I was killed, but here I am. I deliberately refused to respond on time, but here I am talking and laughing at the Nigerian authority who misled the world that I am dead.
“I believe by now Lt Col. Sagir Musa, who issued the statement of my death should bury his head in shame; President Jonathan should bury his head in shame; President Barrack Obama should bury his head in shame, President François Hollande should bury his head in shame, Queen Elizabeth (of England) should bury her head in shame.”
He went on: “How shameful is it for the Nigerian military for a man they called inconsequential to defeat them and seize their tankers and arms. “We have celebrated our victory in Monguno, Benisheikh and surrounding villages, and we shall not relent until total victory comes our way, by Allah’s will.”
He said the Nigerian military would never subdue his group. “Nigerian soldiers are late. After killing many of them in Monguno and Benisheik, we have snatched their armoured carriers and Hilux van and then hoisted Islamic flags on them. We now move freely with them,” he claimed.
However, the Nigerian Army declined to verify the authenticity of the video.
Speaking to sources, Director, Army Public Relations (DAPR), Brig-Gen. Ibrahim Attahiru, said the military authorities were yet to verify the authenticity of the video showing Shekau.
Attahiru said the army could not make any statement either in support or debunk the claims until it concluded its investigation into the matter.
“For now, all we can say is that we cannot verify the authenticity of the story. We are still examining the veracity of the video,” he said.
Other military sources said yesterday that the mood within the military over the video recording was one of caution and apprehension, as the earlier report of Shekau’s death had led to a conflict between DHQ and JTF in Borno State.
“You know that the whole story about Shekau’s death is very sensitive and controversial. The top military hierarchy are still bitter over the way the news was broken, and have been sceptical since then.
“What we want to avoid is this kind of situation where we will be forced to retract our statement.
“However, there is still a high possibility that Shekau is dead and the video is aimed at further creating confusion.
“The challenge now is for the military to once and for all prove that the man is really dead through more creditable sources,” one military officer said.