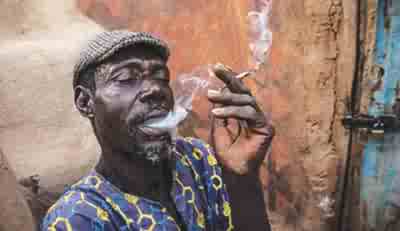 Anti-tobacco campaign had never been this upbeat. Anti-tobacco protagonists are in their best elements. At no time have they been more optimistic than now, with President Goodluck Jonathan promising to sign a more stringent law against tobacco use in Nigeria. Already, two bills are in the National Assembly and would go for President’s assent soon given the optimism being exhibited by anti-tobacco campaigners.
Anti-tobacco advocates premise their position on the fact that tobacco, both smoking and smokeless, cause grievous health challenges leading to preventable cause of death and major risk factor for lung cancer and other diseases. The civil society groups are very active in driving this campaign at both the state and federal legislative and regulatory arenas to prevail on government to sign laws that would promote healthy policies that prevent and reduce tobacco use, as well as protect non-smokers from exposure to second hand smoke.
The campaign is not only in Nigeria but across the globe; it is assuming a dizzying dimension among signatories to the World Health Organisation (WHO) Framework Convention on Tobacco Control (FCTC), a United Nations treaty that seeks “to protect present and future generations from the devastating health, social, environmental and economic consequences of tobacco consumption and exposure to tobacco smoke” by enacting a set of universal standards stating the dangers of tobacco and limiting its use in all forms worldwide. While statistics claim that millions die from tobacco related cancer causing diseases, there is no such record to support the health implication of tobacco use in Nigeria.
The frenzy of advocacy activities sharply contradicts the GATS report. For instance while the Civil Liberties’ Organisations are harping on millions of deaths caused by tobacco related diseases globally, the report say more Nigerians are actually quitting smoking without assistance as they get older. Again, the percentage of smokers are quite infinitesimal compared to smokers in other climes even as the six out of ten adult smokers attempt to quit on their own while about 57 per cent have successfully quit in the last 10 years. Besides, observers have punctured claims by the report that consumers saw anti-tobacco messages during the period in view in various media outlets.
It will be recalled that tobacco advertising in any media format was banned in 2002. Ever since the tobacco companies, especially BATN which was a heavy advertiser at the time, had since then stopped any form of advertising either on radio, television or the print media, a position that was collaborated by the APCON Chairman, Mr. Lolu Akinwunmi, who confirmed in a telephone interview that no such advertising had occurred in the last ten years.
However, while such anti tobacco activities are ongoing, some stakeholders are of the view that the efforts of the anti-tobacco use promoters and the legislature could be better served if individual rights are given a lot more emphasis. According to them, such rights as promotion of a clear individual rights perspective in tobacco control could win support bit of smoking from those who may have been concerned about loss of or interference with personal freedom, excessive governmental power, use of social coercion, or the rights of smokers. For instance, Wale Okoya was worried that the National Assembly is exerting energy legislating on laws that would limit adult buying choices. “If I decide to smoke and die does it concern anybody?”, he questioned.
“What is their business with tobacco? If I want to smoke it’s my business. It’s like some of the things we take for granted. For instance, the number of people dying quietly just because of fake and counterfeit drugs is mind boggling. Do we have enough legislations on that? Do we have advocates behind this already? Instead of them to find areas of life where there are silent killers, that are causing damage in their own quiet ways, these are areas they should really focus on instead of wasting time on tobacco,” Okoya pondered.
Some stakeholders argue that accidents resulting from poor state of the road across the nation claim more lives on daily basis than tobacco. Available statistics from Federal Road Safety Commission (FRSC) show that in 2011, 4, 372 deaths while 17, 464 persons sustained injuries from 4, 765 cases of road accidents reported. Similarly, 4, 260 deaths and 12, 701 injuries occurred in 6, 269 reported accidents across the country last year. It is a known fact that most of these accident cases occur as a result of dilapidated nature of Nigerian roads.
On the other hand, counterfeit and fake drugs, according to statistics, claim over 700, 000 deaths annually while our health facilities are in sordid states with little efforts at improving health care delivery in the country.
Research conducted by three scientists from a USA university discovered that sugar is toxic and cause more deaths annually than tobacco. The research indicated that high calorie, sweetened food is indirectly responsible for 35 million annual deaths worldwide. When compared to tobacco, the tobacco epidemic becomes infinitesimal. The experts propose adding taxes to processed foods that contain any form of added sugar like carbonated drinks, sugar-sweetened beverages such as juice and chocolate milk, and sugared cereals.
There are strong concerns in some quarters that instead of exerting energies on tobacco laws, the legislature should focus on issues that matter the most to Nigerians like electricity, job creation, good roads, healthcare delivery, counterfeit products, good governance, equity and justice, the economy among many other burning issues.
A government that is incapable of providing jobs for its teeming youths should weigh the dare consequences of loss of jobs and its attendant crime rise as well as huge revenue that would be lost should the industry be stifled. Tobacco industry, sources say, contribute more than N30 billion annually to the coffers of the Federal Government.

Stringent Regulation, Ban and Underground Criminality.
According to a senior management staff of Regional Intelligence Liaison Office (RILO), (a global network set up by the World Customs Organisation (WCO) responsible for collecting, analysing as well as disseminating information on trends, modus operandi, routes and significant cases of fraud) who spoke said, banning tobacco production cum products would not achieve the desired result because, according to him, past experiences of government policies on banned products have never worked nor solved any desired economic problem.
He maintained that in a country where demand for tobacco products is high, such action would only give further impetus to underground criminal activities that would be more detrimental to human health as can be seen from countries where tobacco laws are stringent. He averred that due to negative consequences that attend similar trade restrictions, World Trade Organisation (WTO) advocate regulation rather than outright ban. “Tobacco will still come into Nigeria through the back door and by so doing standards and quality would be compromised because tobacco is in high demand. So, even when you ban tobacco production in the country, it will still come into the market anyway. The World Trade Organisation (WTO) is speaking concerning this bill, not to ban, but to regulate. WTO policy on trade is to increase production capacity, produce more but don’t ban. You may decide to introduce stricter measures to regulate the market like high tax rates but definitely it does not encourage banning.”
Similarly, other stakeholders are also of the view that adopting very stringent measures would bear similar consequences to outright banning as evident in countries like Canada, US and Ireland where criminal tobacco smuggling has assumed an alarming proportion with attendant adverse health implications. In addition, anti-tobacco control policies such as the smoking ban, increased taxation and the display ban seem to be failing to reduce smoking rates
Rather, they adduce that effective regulations should be put in place to ensure that local producers maintain best practices while educating consumers on the dangers of tobacco use as well as effective checks to stem smuggling.
Compliance to Standards and Best Practices
Nigeria tobacco industry, reliable sources say maintain the best standard of practice comparable to any globally. Local tobacco production is controlled by regulatory bodies such as customs, Standard Organisation of Nigeria (SON). As a life style brand consumed more for its intrinsic value rather than any health considerations, in Nigeria, it presents a huge market potential with its vast population. Interestingly, RILO sources say tobacco is not a banned substance.
The source expressed fear that introduction of stringent measures to discourage tobacco consumption, might encourage illicit tobacco trade to thrive. With dearth of manpower, logistics and thousands of porous borders manned by ill equipped officers, it will be an uphill task for members of the Nigeria Customs Services to effectively contain the influx of substandard tobacco products across the borders.