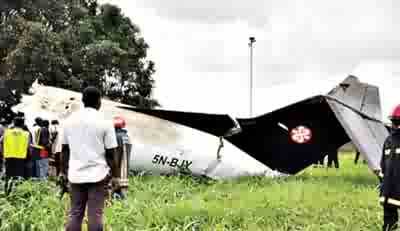 Nigerians were shocked on Thursday morning when the report about the tragic crash of Associated Airlines flight 631 crashed into the premises of Joint User Hydrant Installation (JUHEL) facility at the Murtala Muhammed International Airport, Lagos.
The accident took place less than two minutes after the aircraft had taken off and because it didn’t have the thrust to gain altitude it crashed into the said facility, killing 13 people.
The flight was on its way to Akure and in the cargo hold of the aircraft was the body of the late Olusegun Agagu, former Governor of Ondo State and former Minister of Aviation, whose burial rites the family, relatives and other well-wishers who were in the flight were to attend when the aircraft crashed.
Luckily seven lives were saved by the urgent medication attention and quick emergency response because of the proximity of the accident site and the fact that it happened at the airport.
Speaking to industry experts, including pilots and engineers and the Nigeria Civil Aviation Authority (NCAA) who threw light on developments about the accident.

The Dismemberment of the Aircraft
Aviators who spoke were critical of the destruction of the ill-fated aircraft as people on rescue mission used axe to cut the aircraft even after all the souls on board had been removed. Also the engines were moved severally and they said that this would impair investigation into the actual cause of the crash.
Although many believe that what caused the crash was mechanical, but they said that as much as possible aircraft involved in accident is left to be in the state it was after the crash.
“By the time investigators will start their work, they may find it difficult to identify the cause of the crash because the evidence may have been tampered with,” the source said.. “Nigerians must be made to understand, even under exigencies that their action of carrying out rescue operation must be done under the law.
In other parts of the world, when souls or dead bodies on board an aircraft have been removed you pour a lot of water on the aircraft; they don’t go to touch it or rough handle it.”

Embraer 120 Aircraft
The ill-fated aircraft, Embraer 120, with registration number 5N-BJY was manufactured in 1990 so it is 23 years old and it was acquired by the company in 2005.
Industry operators said that the Embraer series of aircraft have good maintenances status in Nigeria because there are Nigerian engineers, who special in the aircraft type maintenance. An aeronautical engineer said that the manufacturer has good maintenance network.
“Embraer can easily be maintained because the manufacturer has good maintenance network. The Embraer 120 is a well-known aircraft type and pilots and engineers are many in Nigeria.
But what happened is obviously a mechanical problem so you don’t know about the air worthiness status of the aircraft.”

Maintenance Status
Speaking to informed sources in the industry there is general agreement that the major issue the aviation industry has is the issue of effective maintenance of the aircraft in the fleet of the airlines.
Nigeria has a high number of old aircraft with average age of 18 years but there is no maintenance facility in Nigeria, so every major maintenance check is done overseas.
Some airlines do not carry out the maintenance schedule as stipulated by regulations so they cut corners and many crashes had been attributed to poor aircraft maintenance.
An aeronautical engineer said, “No one can tell yet the maintenance status of the engine of the aircraft. When aircraft reaches the stage of the 23 it requires rigorous maintenance. What happened was that the engine of the aircraft may have weakened or it went off. As you are taking off you need all the thrust of the engine. Either the engine died or it was no more working. It is investigation that will throw light on why it stopped working.”

Associated Airlines
The company is linked to a well-known Nigerian figure, Thomas Etu, popularly known as TAK, who is the chairman of the company. Industry sources said that Etu is not an aviator but an investor, who has the resources to turn the airline around. Etu may be the fourth person that may have bought the company. The airline was established by Tunde Oremule who had sold it many times. About two years ago he sold and repossessed it from the buyer, claiming that the buyer did not complete the payment for the company as agreed.
According to NCAA the EMB 120ER aircraft with 30 passenger capacity was manufactured by Embraer S.A. Brazil and registered in Nigeria on May 22, 2007. Before the ill-fated flight, the airline last operated the aircraft on charter flight on August 30, 2013.
“The aircraft was certified fit for flight by one of the airline’s aircraft maintenance engineers prior to departure, who was also on board the ill-fated flight.”

AIR CRASHES IN NIGERIA: A TIMELINE
•On November 20, 1969 Nigeria Airways BAC VC10 crashed on landing, killing 87 people on board.
•January 22, 1973, Royal Jordanian Airlines flight 707 carrying 171 Nigerian Muslims returning from Mecca and five crewmen crashed in Kano, killing all on board.
• March 1, 1978, Nigeria Airways F28-1000 crashed in Kano, killing 16 people.
• November 28, 1983, Nigeria Airways F28-1000 crashed near Enugu, killing 53 on board.
•December 1988, Skypower Brandeironte aircraft overshot Ilorin Airport’s runway, killing all passengers onboard.
• February 24, 1990, a British Helicopter crashed in Eket, Akwa Ibom State, killing all nine people on board.
• May 21, 1991, a Cessna Citation 550 of Ashaka Cement, Hombe, crashed, killing all onboard.
•June 26, 1991, an Okada Air Bac-11 crashed in Sokoto, killing three persons.
•September 26, 1992, Nigerian Air Force AC-130 plane crashed minutes after take-off from Lagos. All 200 onboard perished.
• June 24, 1995, Harka Air Services Tupolev 34 crashed on landing in Lagos, killing 16.
•November 13, 1995, Nigeria Airways Boeing 737-2F9 crashed on landing in Kaduna, killing nine.
•January 17, 1996, Ibrahim Abacha, son of Sani Abacha, was killed in a plane crash. The group “United Front for Nigeria’s Liberation” (UFNL) claimed responsibility for the crash.
• November 7, 1996, a Nigerian Aviation Development Corporation (ADC) Airline Boeing 727-231 flying from Port Harcourt to Lagos with 142 passengers and 9 crew members crashed on landing, plunging into the lagoon with all onboard killed.
• January 31, 1997, Sky Power Express Airways Embraer 110PIA crashed on landing in Yola, killing five.
•September 12, 1997, NAF Dornier 228-212 in Nguru, Borno State ran into a ditch during take-off, none of the 10 occupants died.
• January 5, 2000, SkyPower Express Airways Bandeirante 110P1A crashed on landing in Abuja, killing 17.
• October 26, 2000: Dornier Aircraft plunged into a thick bush near the Niger Delta, six occupants injured.
• March 14, 2002, a helicopter belonging to the Joint Task Force (JTF) crashed in Kabong, Jos, killing all on-board including four senior police officers.
• May 4, 2002, EAS Airlines’ BAC 1-11-500 with 105 people on board crashed in a densely populated suburb of Kano, killing 76 on board and 72 on the ground bringing total casualties to 148.
•November 30, 2003, a Cargo aircraft of Hydro Cargo, Brussels, Belgium, crash-landed.
• March 6, 2004, an Aenail spray aircraft with registration number 5NBEF belonging to Berfieex Nigeria Ltd, crashed at the Bauchi Airport.
•July 26, 2004, Pan African Airlines’ helicopter crashed into the Atlantic Ocean in Eacraros, Delta State, killing four persons onboard.
•December 29, 2004, a Boeing 727 of Chanchangi Airlines belly-landed at the MMA.
•December 29, 2004, a Kenya Airlines aircraft crashed- landed at the MMA due to gear fault.
•January 28, 2005, a Nigeria Air Force fighter plane crashed into a farmland in Yar Kanya, Kano State.
• February 25, 2005, ADC’s B73 aircraft had its tyre burnt while landing at Yola Airport.
• March 27, 2005, one of the engines of a Boeing 737 belonging to Bellview caught fire.
• June 11/12, 2005, a Boeing 727-200 aircraft belonging to the domestic Chachangi Airlines overshot the runway at Murtala Muhammed Airport, Lagos while yet another overshot the runway at the airport in Jos in central Nigeria a day earlier.
•June 24, 2005, a Russian aircraft belonging to Harka Air crash-landed at the MMA, all the people on board died.
•July 6, 2005, an Air France A330 plane crashed into a herd of cattle at Port Harcourt airport, sustaining serious damage and killing many of the cows.
• July 23, 2005, a Lufthansa aircraft crash-landed at Lagos airport and was badly damaged, but no life was lost.
•October 22, 2005, a twin Engine Boeing 737, belonging to Bellview Airline crashed in Lisa Village, Ogun State and killed all the 117 passengers on board.
•December 10, 2005, a Port Harcourt-bound Sosoliso Airlines flight 1145 crash-landed in Port Harcourt Airport, killing 109 passengers including 60 students of Jesuit Loyola College Abuja.
•September 17, 2006, an 18-seater Dornier 228 Air Force transport plane, carrying 15 senior army officers and three crewmembers crashed in Benue State, leaving only three survivors.
• October 29, 2006, Aviation Development Corporation Airline Boeing 737 with 104 on board crashed minutes after take-off from Abuja’s airport. All but 6 perished in the disaster.
• November 10, 2006, a six-seater helicopter belonging to Odengene Air Shuttle (OAS) crashed in Delta State, killing two people.
•August 2, 2007, Bristow-owned helicopter crashed inside ExxonMobil facility in Port Harcourt.
•March 15, 2008, Beechcraft 1900D plane marked 5N-JAH, belonging to Wing Aviation crashed in Cross River State. The wreckage was not found until six months after. All four crew members died.
• March 8, 2011: HS-125 chartered aircraft crashed in Bauchi. No casualty.
•March 14, 2012, a helicopter conveying the newly promoted Deputy Inspector General of Police, Haruna John, with three other senior police officers crashed in Jos. The Police helicopter was to convey the officers from Jos to Abuja, and took off from the Jos prison field.
• Sunday, June 3, 2012, the nation was thrown into mourning again as a Dana Airlines Flight 9J 992 carrying 153 passengers on board crashed into Iju-Ishaga, a densely-populated residential area of Lagos, killing all passengers on board,
•A Nigerian cargo plane, a day before, had attempted to take off from the Kotoka International Airport in Accra, Ghana, but crashed on Saturday night, killing 10 people and injuring an unspecified number of others.
•Four months after, precisely October 25, governor of Taraba State, Danbaba Suntai and five of his aides narrowly escaped death when a Cessna 208 aircraft marked 5N-BMJ and piloted by Suntai, lost contact with the Yola Control Tower 38 miles to landing, after leaving Jalingo, the Taraba State capital and crashed into a hill in Adamawa.
• December 15, 2012, the nation was again thrown into mourning with the news of four persons dead, including Governor Patrick Yakowa of Kaduna State and former National Security Adviser to the president, General Owoeye Azazi. They were reportedly burnt in a helicopter crash that occurred in the forest of Okoroba community in Nembe local government of Bayelsa State.
•And Thursday, October 3, 2013, an aircraft belonging to the Associated Airlines conveying the corpse of former Ondo State governor crashed, minutes after takeoff at the local wing of the Lagos Airport. The plane had 20 people onboard.