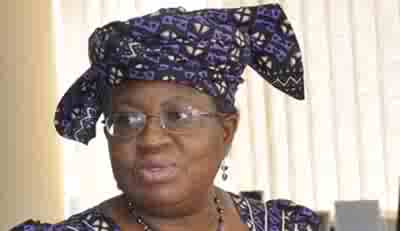 The Coordinating Minister for the Economy and Minister of Finance, Dr. Ngozi Okonjo-Iweala, Monday insisted that the economy was not broke, even as she assured Nigerians that the country has been meeting all its obligations.
The finance minister expressed concern over the negative remarks on the state of the economy in the past one year.
Speaking on a programme monitored on Ray Power FM, she assured Nigerians that the economy was strong.
Okonjo-Iweala explained: “How can you say the country is broke or economy is not working when out of N1.7 trillion of personnel cost and wages, we have paid N1.3 trillion so far and people have been receiving their salaries? Last month, on the 18th, they received their pay. Out of overheads budgeted of N248 billion, we have paid N180 billion so far.
“On capital budget, we have released N850 billion, 95 per cent Cash-backed and 75 per cent of that has been utilised and we have been paying and servicing our debt. Yes, there was an issue of N75 billion being owed the Federation Account Allocation Committee (FAAC) by the Nigerian National Petroleum Corporation (NNPC); that money has been paid and has been divided among the states and the local government and federal government and that money is now behind us.”
According to her, the federal government had been forthright in communicating issues about the state of the economy to Nigerians.
Continuing, she said: “When we had cash flow problems, I shouted about it, when we had a problem that we might not be able to pay personnel due to amendments in the budget, I shouted about, when we had oil theft, I also shouted about it. I have always put the issues on the economy forward. I have always done so and I am encouraged to do so.
“We have been putting the issues forward, but Nigerians don’t pay us to only talk about issues and problems, they pay us to solve the problems and that is the attitude the President has always taken. So once you identify an issue, you should go and solve the problems.
“All these people who are saying the country is broke should be very careful. See what is happening in the United States now. We should not over politicise the economy. The economy is a very precious thing to us. It looks like, the economy is there, no one can see it, but when you begin to talk it down, people will start believing them. But if that is the strategy, it will not happen here!”
Throwing more light on an earlier disagreement over FAAC allocations, Okonjo-Iweala said the federal government had been discussing with the governors and most of them had been understanding.
Speaking on the shortfall in crude oil production and earnings as a result of theft, she said: “In budgeting, you make estimates, if the estimates don’t work out, you adjust and we have been able to adjust not in a way that materially affects the works that is going on.
“You make those adjustments in a sensible manner, we also have shortfall in non-oil revenues because some of the policies we are also implementing which Nigerians like, led to a shortfall in non-oil revenues. When we say we are going to grow our own rice and stop importing, the consequence is that the Customs duties would reduce so some of the policies we consciously went into have also resulted in that but it is not to an extent where would say this is a crisis,” she added.

Caption: Housing Estate
Police Contribute N8bn to NHF, Float Mortgage Bank
James Sowole
The Acting Assistant Inspector-General of Police (AIG) in charge of Zone 11, Osogbo, Mr.  Mohammed Indabawa, has lamented that despite about N8 billion contribution by the Nigeria Police (NPF) to  the  Federal  Mortgage  of  Nigeria (FMBN) through  the National Housing  Fund  (NHF), members of the Force could not access loans for their housing needs.
The AIG stated this in Akure, Ondo State at a sensitisation programme on the newly established Police Mortgage Bank meant to cater for the needs of the members of the NPF.
Indabawa, who said the police was the highest contributor to the FMBN, said the inability of members of the NPF to access loans was because the Force could not float its own mortgage bank.
According to him, several efforts made to establish a mortgage bank in the past had been stalled by administrative instabilities generally occasioned by frequent change in the leadership.
“Besides other technicalities and statutory requirements by the Central Bank of Nigeria (CBN) and other regulatory agencies, the capitalisation sum of N2.5 billion for a state branch or N5 million for a national branch is a prerequisite for a mortgage bank to be licensed,” he said.
Indabawa commended the Inspector-General of Police, Mohammed Abubakar, for acquiring and ceding ownership of Fokas Savings and Loans Limited to the Police Cooperative Multipurpose Society Limited and through which policemen would be able to secure loan for  their housing needs.
He said the next step after acquiring the existing Primary Mortgage Institution (PMI), was to capitalise it in line with CBN guidelines. To recapitalise  the institution, Indabawa said  every police man  was required  to  buy  into  the shares  of the bank irrespective  of  the rank.
Specifically, the acting AIG said a minimal subscription of Fokas shares would  be subscribed  to and  for  which N11, 000 would be deducted from  salaries of  members of the NPF across all ranks including the IGP, DIGs, AIGs, and CPs down to the constables.
“Therefore, every police officer is a part owner of the Police Mortgage Bank and will be issued certificates for the minimal subscription as well  as for additional subscriptions”, Indabawa said
Indabawa said every contributor to the NHF was entitled to a mortgage loan of N15 million to build, purchase or renovate home with a maximum repayment of period of 30 years.
He pointed out that the loan would only attract a minimum interest of six per cent and maximum of eight per cent per annum throughout the loan tenure “which translates into affordable monthly loan servicing deductions for the beneficiary.
He described the IGP initiative as a perfect retirement plan which would help combat corrupt tendencies within the force and provide an enabling environment for efficiency and meritorious services.