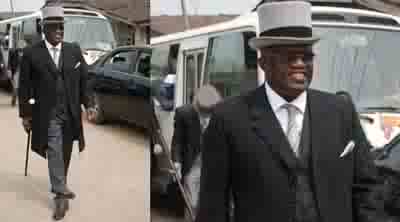 Adeola Akinremi writes about the last moments of the celebrity go-to, undertaker,Tunji Okusanya  Snr. who died with his son and four of his staff in the ill-fated Associated Airlines aircraft, in Lagos last Thursday
He had spoken to Bobby, his driver, last night on the phone. It was their last conversation.
“I want to talk to you about a few things,” he said. “Can you give me an update about the burial site and the decoration for lying-in-state?” Then, Bobby told him, “We have put everything in place. It rained and we just need to wash the hearse before coming to the airport tomorrow.” He hanged up the phone.
The next morning was a Thursday. He sat down beside the coffin and prayed with his staff. He prayed against death, though he had no fear of death. He prayed for the success of the event, though he had ever been successful in the business he was reputed to be the changemaker.
After the prayers, he gave final instruction to the team that followed him.  He had prepared Chijioke Duru, Kingsley Amaechi, Samson Hassan, Akeem Akintunde, and the heir to the business, Junior as his lieutenants for the journey.
Time passed, a long time.  Finally, together with 14 other passengers and the coffin bearing the body of a former governor of Ondo State, Olusegun Agagu, they were all aboard the Embraer 120 aircraft with registration number SCD 361 belonging to Associated Aviation Limited, heading for Akure in Ondo State where dignitaries, family members, friends and associates of the deceased had gathered for his final burial ceremonies.
Then, there was something wrong. In less than a minute after take-off from the local wing of the Murtala Muhammed International Airport in Lagos, the aircraft he was flying in with his staff, marked 5NBJY, crashed near the tank farm of Sahara Group within the precinct of the airport. He died. His son and four other members of staff died too. His dark hairs, plump body, imposing figure and repose of his sweet face — they all blurred into one ghostly form and began to move upward towards the stars.
MIC Funeral Services boss, a big-time undertaker who changed the face of the funeral-home industry in Nigeria, Olatunji Okusanya was preparing his son popularly referred to as Junior (because they were namesake) to take over the business and continue the journey after him before both of them died in the ill-fated Associated aircraft last Thursday in Lagos.
Sources close to the family disclosed that Okusanya had a great plan for Tunji and he never hid it from anyone. “Tunji (Junior) had become the face of MIC, even while his father was alive. Director had great plans for him and he mentored him every day before they both died untimely,” the sources said.

My Father’s Dream
Interestingly, in an exclusive interview Okusanya Jnr. granted which was published on Wednesday October 2, a day before he died alongside his father and other staff in the ill-fated aircraft, he talked about his father’s dream for him. “I am planning this hotel for the dead project which will be a big burial site that will change people’s orientation about cemetery. It will change it from a place to mourn the dead to a place where tourists can go for knowledge. Taking a cue from notable cemeteries like the Arlington National Cemetery in  the United States, The Military Cemetery in Cuba, and The Kwame Nkrumah National Park in Ghana, all of which have been deemed tourists sites where visitors go to learn about the history of various notable people in the country, I think the time is ripe for us to set out to do something in that direction.
These are various beautiful sites loved by local and international tourists over time. As a nation, the importance of the hotel for the dead to our historical, social, language, art and family studies cannot be overemphasised. With these in mind, it is wise to conclude that a cemetery should be befitting, treated with reverence, respect and decency. The cemetery should not be a place for weeds, litters, broken blocks and badly built tombs but rather a resting place, well built, even comfortable enough to be inhabited by the living for family picnics, excursions and research. I am happy that my father is giving me his support for this project to become a reality,” he had said of his father’s dream for him before they both died last Thursday.
Okusanya snr. was said to be planning a fundraiser for his son upon their return from Akure to be able to realise the dream. He sealed the deal for the burial site in Oyo State a few weeks ago and work had started with clearing of the bush to prepare the site for his son’s hotel for the dead project where tourists would go to learn about the history of the dead. THISDAY gathered that the reason Okusanya was fond of taking his son around was to help him build necessary contacts and clouts  needed to survive in the undertaker business.

His 60th Birthday Plan
Besides that, Okusanya had spent his last days looking forward to his 60th birthday, which would have been celebrated in a big way on November 12.
“Director would have clocked 60 next month. He had plan for that too,” said Bobby, his driver who led advance party to Akure ahead of his arrival which he never did.
To celebrate his birthday, Okusanya had priced a Mercedes-Benz G-Class also called G-Wagen somewhere in Lekki last week and was planning to buy that as a gift for his birthday by the end of October.
A Chief Planner for Mamora’s Son’s wedding
Also, Okusanya was the chief planner for the wedding of Senator Olorunimbe Mamora’s son slated for this weekend in Lagos. Mamora and Okusanya had been childhood friends. So, when Mamora heard report of his death, he was in denial. He rushed out of his home to LASUTH last Thursday to get the true picture.
When he arrived at the entrance of the teaching hospital’s mortuary on Thursday October 3rd, at about 1. 42pm, his calm mien was still there for everyone to see, then he strode into the mortuary along with the Lagos State Commissioner for Health, Jide Idris and his counterpart at the Ministry of Special Duties, Wale Ahmed who were going round to ascertain the situation of things following the plane crash.
But when Mamora came out ,he had become grief stricken.  And though he managed to control his emotion to avoid pressure from the waiting sympathisers who had gathered at the entrance of the mortuary in their hundreds, in his eyes all was not well. As the bewildered Mamora took some steps forward towards where he had parked his vehicle and trying to come to terms with what has happened to his friend, he told THISDAY that Okusanya was his bosom friend and it was incomprehensible for him when he arrived the mortuary to see him dead. “I have had conflicting reports and I said let me go and check. I got inside the mortuary and I found him dead. I saw some charred bodies too that were burnt beyond recognition, but Tunji was recognised.
“I am in a shock. Tunji was my dear good friend. He was the one really planning the wedding of my son as a go-between for us and the bride’s family,” he said.

Dedication to Excellence
The Head of Operations at Omega Casket who spent time with Okusanya before his death, Ayodele Ogini, described Okusanya as a “grandmaster and a big tree” through whom many others came into the funeral-home industry as undertakers.
He said:  “He was the pioneer of modern day funeral-home industry. He was the person that changed the face of the industry, bringing pall bearers and taking casket off rickety vehicles. He introduced professionalism, discipline and quality service. He made funeral-home industry a place where graduates can look for jobs and go on to establish their own.  He created opportunities for people and was very dedicated to his job. The painful thing is that he would have left Junior his son to continue the journey after him, but they were both gone. He was trying to bring his son on the line and then exit to enjoy in retirement when he died with him. It is a great loss for the industry because of the leading position Tunji Okusanya occupied and the inspiration he offered to others. It is a blow to the funeral-home industry.”
Also, the Executive Director of Marblement Ventures, a mortician, Biola Williams, who identified the body of  Okusanya and his son at the mortuary  described Okusanya as a man who was hard to beat and very supportive to others. “I worked for Tunji Okusanya for 27 years. I was hoping he will be one of the survivors with his child, but they died.  Okusanya gave me courage to face life. I spoke with Junior a day before the crash and we were expected to be in Akure together. It is sad. That was two generations wiped out of existence,” he said.
Penultimate week, Okusanya was given a merit award at Muson Centre in Lagos for excellent service and with that he said his final thank you to the world of morticians.
He gave an idea of how he would like to be buried when asked by a reporter. He said: “My children know what I like to wear but it is always good to plan beforehand because in most instances, your kids will not give you what you want. My children should bury me the way I live.”
In 1982, Okusanya, who studied engineering in England, left his father’s shop as an apprentice to start his own company taking along the first letter of each word in the name of his father’s company, Magbamowo Industrial Company (MIC) to form his own company named MIC Funeral Services.
A celebrity go-to undertaker who had seen many gone under six-feet, Okusanya who had played hide and seek with friends inside coffins as a young boy in his father’s shop was surely familiar with the way of the dead, for he said, “we need to understand that life is not permanent, it is borrowed.”