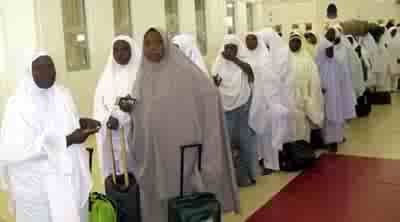 No fewer than 150 intending pilgrims to this year’s hajj in Mecca, Saudi Arabia, have allegedly been duped of the money earmarked for the trip by their travel agent.
It was gathered that the victims who were swindled of N950,000 each earmarked for visa processing, airfares and other logistics, are stranded and have turned the Murtala Muhammed International Airport (MMIA), Lagos and the mosque within the environment to their abode.
As at yesterday, the intending pilgrims drawn from Ogun, Osun and Oyo States, were still clad in the traditional attire they had worn last Friday when they had expected to travel to Mecca aboard Qatar Airways.
To their chagrin, the trip was aborted and they could not travel as planned as their visas were not released to them by the agent whom they had contracted for the job.
One of the victims, who spoke on condition of anonymity, expressed fears that they might miss the hajj if they were not able to travel yesterday night or early today, since the Jeddah Airport in Saudi Arabia would be officially closed today.
Another pilgrim identified as Mr. Abdulwasiu Adeyemi, from Ogun State, lamented that he had been at the airport since last Friday, and was yet to be cleared for the pilgrimage.
He said he had paid the agent N950,000 for visa processing, air ticket and other logistics, adding that as at last Friday, his international passport containing the visa was not returned to him by the agent until Tuesday.
Adeyemi said although he had his passport back, they were told to pay an additional N280,000 for a return flight ticket for the exercise despite having paid for it already.
He said: “I’ve never had any business deal with this company before now but I am still astonished at the way we are treated by its official. He told us to be at the airport as early as 10am last Friday for our flight with Qatar Airways the same day, which we complied with, but unfortunately, our passports and visas were not given to us by the agent as he claimed that they were not ready then.
“I just collected my passport now and he told us to go and pay another N280,000 as air ticket. I don’t actually know what is happening. I would have observed the exercise with the state, but most of us were told that the state could only cater for a certain number of pilgrims and unfortunately, some of us were not picked by the state.”
Another pilgrim, Alhaja Muibat Arogunjo, blamed the agent for their woes, adding that  she had already spent all the money in her savings for the exercise and so could not afford the additional sum for the return ticket.
But a representative of the travel agency who declined to disclose his identity, debunked the claims.
He said the delay in the return of their visas by the Saudi Arabian Embassy in Nigeria led to the inability of the pilgrims to travel on the agreed date.
The agent said those who missed their flight last Friday due to the unavailability of the visas would only pay $200 each as sanction for doing so  while those who were yet to purchase tickets would pay N160,000 to purchase a return ticket.