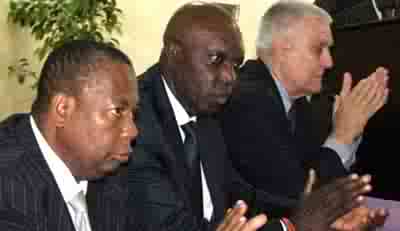 President Goodluck Jonathan has approved the takeover of the management and control of the National Economic Reconstruction Fund (NERFUND) by the Central Bank of Nigeria (CBN) and the Nigeria Deposit Insurance Corporation (NDIC) over gross operating losses amounting to N5.7 billion.
Jonathan’s approval followed the recommendations contained in the CBN and NDIC Joint Special Examination report on the books and affairs of the Fund.
The report had alleged that the capital invested in the institution by the Ministry of Finance had been completely eroded with gross losses totalling N5.7 billion.
The Fund, the report added, had not been able to service loans taken for on-lending from the African Development Bank (ADB), the Ministry of Finance and other sources.
Following the take-over, a new management team appointed by the Ministry of Finance is currently headed by Mr. Muhammad Gidado Kollere of the NDIC as Managing Director/Chief Executive while Mr. Ihua Elenwor of the CBN was named the Executive Director (Operations) of NERFUND.
According to a statement signed by the Special Adviser to the Minister of State for Finance, Dr. Asheikh Maidugu, a copy which was made available to sources, the new team is expected to oversee the affairs of the institution for an initial period of one year.
It was also mandated to among other things, mount an aggressive recovery of all outstanding loans, overhaul the Fund’s records, reconcile all accounts with correspondent banks and render quarterly report to the Board of the Fund, headed by the Permanent Secretary, Federal Ministry of Finance.