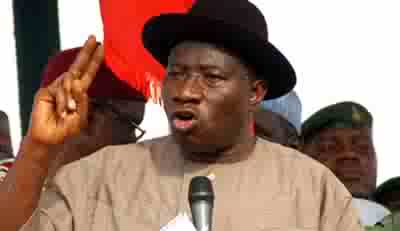 President Goodluck Jonathan has reaffirmed the commitment of his administration to deliver reasonably stable power supply to the country by the middle of next year, saying his focus is not on the generation capacity but in ensuring that any amount of electricity that is generated is transmitted to Nigerians.
Speaking yesterday at the official inauguration of the 500megawatt capacity Omotosho Power Station built under the National Integrated Power Project (NIPP) in Okitipupa Local Government Area of Ondo State, Jonathan stated that additional capacity to the national grid would not have positive impact unless it is transmitted to Nigerians.
He said the inauguration of the Omotosho plant barely two weeks after the 434mw Geregu NIPP plant was inaugurated in Kogi State was part of the efforts of his administration to ensure “adequate, reliable and sustainable electricity supply to our country men and women.”
He said the two completed NIPP power plants, together with eight remaining ones would add over 4,700megawatts to the national grid when fully inaugurated by the  first quarter of 2014.
He commended the private sector for sustaining the enthusiasm in the ongoing reform in the power sector, assuring the investors that the Federal Government has confidence that they would deliver.
“They (private investors) also believe in the government. Of course, that is why they have invested about $3billion in the sector. To support the ongoing process, the Nigerian Bulk Electricity Trading Company has been capitalised to the tune of over $750million, positioning it to effectively realise its mandate.
Arrangements are under way to adequately fund the Nigerian Electricity Liability Company to effectively assume liabilities associated with the privatisation of PHCN assets, as well as other liabilities and related issues,” he said.
“I like to reassure all PHCN workers who are yet to receive their full severance package that government is working hard to make sure that all of them get what is due. There is no need for industrial action. Things can only get better,” Jonathan added.
Also speaking, the Minister of Power, Prof. Chinedu Nebo said with the rising contribution of NIPP projects to the national grid, power generation has improved significantly to around 4,500mw.
Nebo, who commended the three tiers of government for funding the NIPP, said the programme was already adding 1,600mw to the national capacity.
The minister directed that a 32kva transmission lines be built from Omotosho to pass through Ore to Ondo and Akure.
Nebo said the transmission line, when completed, would relieve the Osogbo-Akure transmission line that is currently serving the state.
In his speech, the Governor of Ondo State, Dr. Olusegun Mimiko commended President Jonathan for what he called the monumental success recorded in the power privatisation programme.
“I salute your leadership efforts in turning around the infrastructure capacity of the country. History will judge you right in your efforts.. We are moving steadily and there is no looking back,” he said.
“We are not there yet. But there is no doubt in my mind that we know where you are taking us and we are ready to go with you,” Mimiko added.
Mimiko said it was in appreciation of Jonathan’s efforts that his state supported the decision of the National Economic Council to reinvest the proceeds from the sale of NIPP assets to upgrading critical transmission facilities.
Chief Executive Officer of Niger Delta Power Holding Company, owners of NIPP, Mr. James Abiodun Olotu commended China Machinery Engineering Corporation (CMEC) for completing the project six months ahead of schedule.