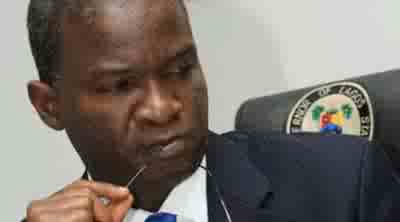 Lagos State Governor, Mr. Babatunde Fashola (SAN) Monday reiterated his opposition to the operation of the Nigeria Sovereign Investment Authority (NSIA), better known as the Sovereign Wealth Fund (SWF), noting that the federal government under the 1999 Constitution lacked the powers to save on behalf of the state governments.
The governor added that the SWF, which the NSIA was set up to manage on behalf of state and local governments, was a flagrant violation of the section 162 of the 1999 Constitution.
He utterly differed on the establishment of the fund and NSIA while addressing the authority’s Chairman, Mr. Mahey Rasheed and Managing Director, Mr. Uche Kalu during a visit to the governor at the State House, Ikeja, to handover the state’s share certificate showing its ownership of the fund.
At a meeting during the visit, Fashola said he was not comfortable with the fund because Section 162 of the 1999 Constitution only “makes provision for the creation of the Federation Accounts and not the fund.”
He frowned at a situation whereby concepts like the SWF would be brought into the country without taking cognisance of the country’s socio-economic and political conditions and realities.
He explained that the fund was established when the states “are having shortfalls in receipts on the monthly payments from the Federation Accounts Allocation Committee (FAAC) needed to keep development going.
“It is something that I want to have continued engagement about the merit at this time. But as I said I will continue to talk to the Managing Director, Mr. Uche Orji. And as I told him before, my mind is open. But I need a compelling argument to persuade that this is the way to go at this time,” he said.
Addressing his visitors, he said: “You mention constitutional democracies. Is there any of them that includes Section 162 of the 1999 Constitution of the Federal Republic of Nigeria? Do any of those countries you mention write in its constitution that any money that comes in must go into the Federation Accounts?”
He demanded that all the components of the federation should sit down “to ask real questions. Do we need this? If yes, do we need it now? If we need it now, does our law allow us to do it or are our laws the same to the laws of those countries where the ideas were brought from? And what are the real dynamics of the global economy today? Is this a saving economy or time for investment?
“Other issues include: how do we save money by an Act of the National Assembly when the constitution that created the National Assembly itself stated that every money that comes in this country must go into the Federation Accounts and that any money standing in credit in that account must be distributed between/among the federal, states and local governments?
“For me, it might be comfortable for some of my colleagues to support the fund. But I think I own a sense of duty to advice, as a legal professional and a leader in my profession that I do not feel comfortable with this kind of arrangement. It is not because I disagree with saving, but because questions may be asked in the future that lawyers were sitting among you when this kind of thing happened.
“It is not too late to make the savings initiative. There can be a bad way to do a good thing. Also, there can be a good way to do a bad thing. There are much more fundamental issues beyond the constitutional hurdles. I think that is the first thing we must cross. If we cross those issues, we can begin to discuss what percentage of the monies should be saved or should the federal government save for us.”
He expressed concerns about the disparity in the country’s revenue allocation formula under which the federal government “is getting 52.68 percent of the total earnings that comes into this country and the state governments get 26.72 percent, while the local governments only get 20.60 percent.
“Even when the federal government was persuaded, the government demanded to know what stopped it from saving its part of 52 percent, its response was that the country’s infrastructure was 40 years old already.”
He explained that the infrastructure fund component of the SWF when the country’s critical infrastructure was really over 40 years old, was something else.
“This country is running on the infrastructure that was built after the 1969 civil war. But the population we had at that time has multiplied many folds,” he observed.
In his remarks, Rasheed said the rationale of the SWF was purely meant for investment and to take back the proceeds of the investments, which will be distributed to the federating components.
The chairman also differed with Fashola’s perception of saving for the next generation, explaining that the NSIA was not saving to inherit.
“It is saving to produce investment so that the country can get more money and then we invest more. When are talking of the infrastructure fund, it is part of the three funds under the Nigeria Sovereign Investment Authority.
“If we have the capability of getting one dollar out of this one dollar, and out of this one dollar, we can get it twice. We are getting investors both in equity and debt just like the United States of America. We invest and definitely, we have to repay it.
“The difference is that the investment that would be made by the NSIA is for profit. Like the investment in the construction of roads, power plants and others, we do it on a commercial basis and sell the service. When we get more, we will do more.
“This is basically another way in which many other federal democratic states such as Australia, Norway and others in world have done,” Rasheed explained.